I have made it no secret to my peers that I hate going to conferences. In one year, I had to go to New Orleans twice, and by “had to,” I mean “highly encouraged by my department and peers to present at conferences and make a name for myself.”

The last conference I went to did indeed have some highlights that I would love to share. Forgive me if the pictures I provide are … not of terrific quality.

1) New Orleans has great food – this is undeniable.

Among the many things I consumed in New Orleans:

a) Seafood Po’ Boy. Why the Vietnamese haven’t adapted the bánh mì and take this concept to new heights is beyond me. Let’s get on it, Lee’s Sandwiches (no relation)!

I literally got away from the overwhelming cacophony of the conference I attended and crammed this seafood Po’ Boy into my face without a moment of shame.

b) Bananas Foster. Apparently if you combine bananas, ice cream, and syrup and set the whole thing on fire, glory happens.

Another reason why paying over $700 to attend this conference. was not a mistake. Except it was.

c) Beignets. My New Orleans friends told me they go great with coffee. I wonder why.

For a culinary experience, I had a terrific time there. That wasn’t the only wonderful part of the trip.

2) The French Quarter is full of music, color, and vivacity.

If you’re in the famous French Quarter in New Orleans (fortunately minimally damaged after Hurricane Katrina in 2005), and you don’t hear music. I’m sorry, but you’ve gone deaf. The city is known for its brass and its rhythm, and I could not help but get drawn in by the sounds.

Massive, unified brass bands are not an uncommon thing in the French Quarter. 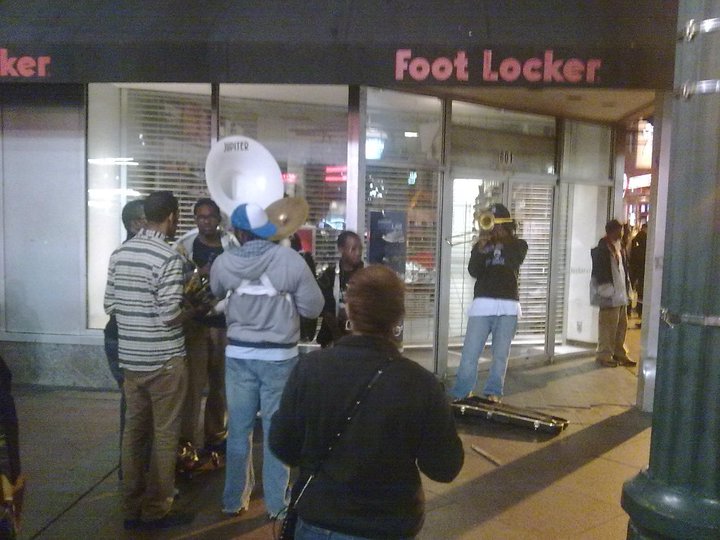 Smaller, random gatherings in the evening outside of a Foot Locker happen, too.

Even this Japanese restaurant hasa bluegrass band that takes requests. The lead singer looks like Ellen Page a.k.a “Juno,” which I thought was cool.

Sometimes, you don’t even need to be in a band just to make a lot of noise… 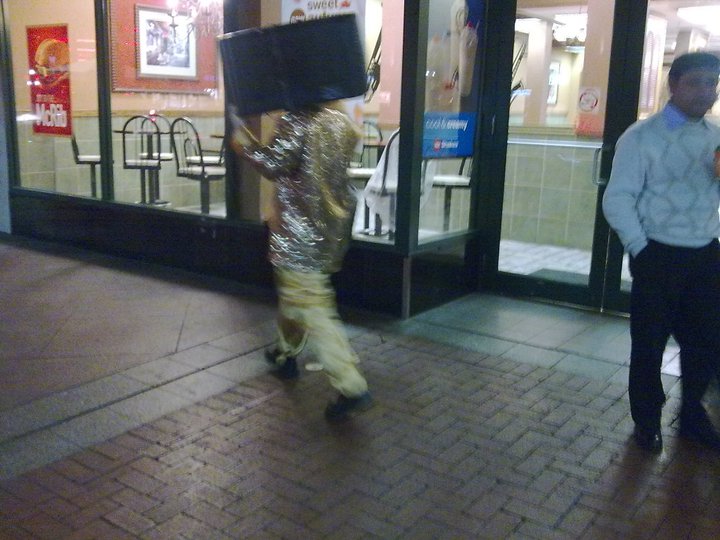 This gentleman with a massive boom box was made of solid gold. Who are you to say he was not?

New Orleans is not just a feast for the ears. It is a town that will amaze your eyes as well. For instance, when you walk out of the terminal at the Louis Armstrong International Airport:

Sometimes, however, the images might be too much to handle…

This…. thing, on the other hand, needs some explanation that I cannot provide as a social scientist or… otherwise.

All in all, it sure seemed like I had a great time in New Orleans… but I didn’t. Why not? Well, because of this photo. 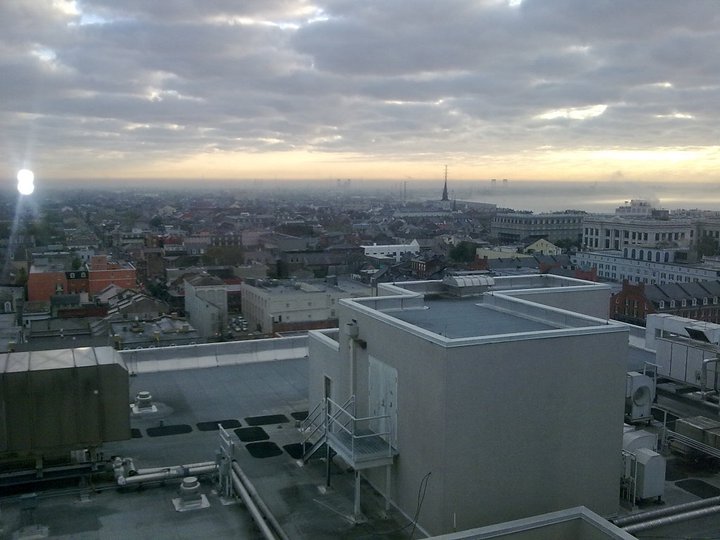 Nobody showed up to my panel, so I took this picture with my old cell phone and started to contemplate my life.

While this may seem like a majestic view of New Orleans just after day break, it is a constant reminder of who was behind me as I took this photo: no one. I served on a panel with a UCLA graduate student and a UC Riverside assistant professor, scheduled for 8am on a Sunday morning. Nobody showed up to the panel. When my fellow panelists realized this, we shrugged our shoulders and presented to each other anyway, as if we did not hear enough about our work among the three of us.

What frustrated me the most was not the fact that nobody showed up, but I paid a lot of money to present a paper that nobody new and fresh would receive. Below is a list of the costs of my trip to New Orleans:

$766.68 – My total estimated expenditure for this conference. Over 1/3 of my monthly fellowship stipend – gone. Amount that my university reimbursed me for the trip: zero.

What was the point of going to this conference? I failed to share my work with anyone new. I failed to really network with anyone, although I did run into some random people from my undergraduate days. Still, if the point was to go out and network with as many scholars of cinema and build a colleague base, why must the cover charge be so high just to get into the club? The sheer volume of people scurrying in and out of the hotel alone made it impossible to have a meaningful conversation with anyone. As I was there, I kept thinking to myself:

“I’ve made a huge mistake with my life.”

Am I alone in feeling this way? Was this a vacation or a professional networking venture? Has anyone else out there ever felt like they’d rather network and present in a different manner than these highly expensive, crowded, alienating conferences? Please, tell me your thoughts about your most expensive conference trip to date..