Rising above the fray of the MTV Video Music Awards, the enigmatic duo of Daft Punk offered an alternative presence to the confluence of celebrity. Daft Punk somehow tows the line between immense notoriety and well-guarded secrecy. Some have compared their use of theatricality to that of Lady Gaga, but the mechanics are completely opposite. Lady Gaga’s music is heavily reinforced by her theatricality. Daft Punk’s theatricality is introverted, meant to shield themselves allow their music to stand alone. 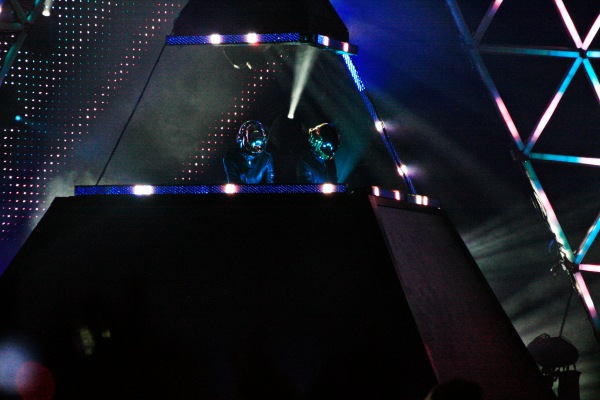 Despite their frequent attempts to remain cloaked from the limelight, most recently balking on an appearance on The Colbert Report, Daft Punk has been wildly popular team since the mid-1990s. Yet there are no public demands for them to discard their robotic exteriors and explain their actions. People only care about the music.

Daft Punk’s unique example of celebrity shows that it is possible to separate one’s personal identity and artistic craft in order to be popular. Of course, there are a confluence of other factors that influence celebrity, such as gender or race, but there’s comfort in knowing that some groups can exist solely for their musical talent.

It was even their lack of appearance on The Colbert Report that left an impact: http://www.colbertnation.com/the-colbert-report-videos/428372/august-06-2013/stephest-colbchella–013—daft-punk-d